Not enough stock.
Your item was not added to your cart.

First, Counter-spin Magnetize Filter is a core technology of Poseion that converts ordinary tap water into magnetized water.Second, this filter consists of an upper circular magnet and three lower square magnets, which rotates at high speeds from 1,200 rpm to 2,400 rpm to produce magnetized water (Ionized water). The upper and lower magnets rotate in opposite directions, creating a powerful ionic activation effect. (The ionization process can be shown through the clear window from the head. And this method is several times better effect on ion activation than a typical one-way magnetized water generator.)Third, ion-activated water from this process is called magnetized ion water (“Magnetized water”) and it has hexagonal clusters. This change normally requires a strong magnetic field, but it was simply implemented by our “Counter-spin Magnetize Filter”.Studies have shown that magnetized water promotes plant growth and inhibits bacterial growth. It also has various effects on skin moisturizing, exfoliating, and dissolving oils due to changes in water molecular structure to hexagonal form. first, “Combination Filter” is a new concept complex filter that resolves rust removal, water purification, and chlorine removal of tap water at once.Second, “Combination Filter” inside the handle removes any harmful substances, including rust and residual chlorine,from the old water pipes of each household to help you shower with clean water. Users can see hazardous materials filtered through the clear window from the handle.Third, “Combination Filter” can easily be replaced. Once it is replaced, this filter can be used for up to two to three months depending on the existing tap water condition. 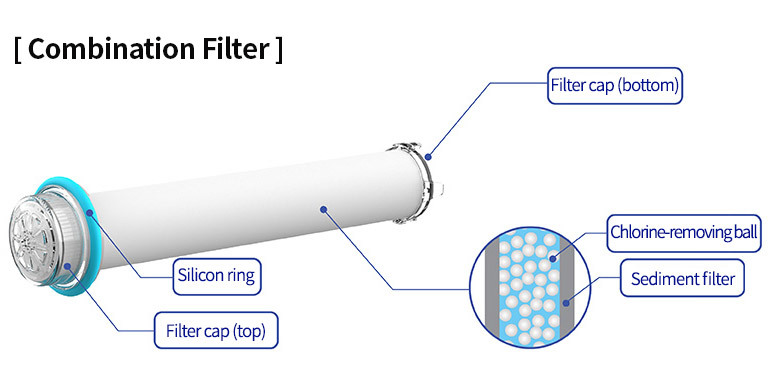 First, “Posseion BT100” sprays magnetized water from the microplate which provides a powerful water-saving effect and raise water pressure.Second, the “Microplate” has 334 ultrafine holes that spray high pressured water due to the rise of pressure inside the shower head. With this feature, the user can experience effectively raised water pressure that you were not able to experience from ordinary shower heads. This gives the same refreshing effect as the “Leonard effect” near the waterfall.Third, Also, ultrafine holes from the “Microplate” save 30% to 50% from the existing shower even if you take the same shower at the same time.